Day 7: Dingboche to Lobuche & The Valley of Ghosts

Terrain: Rolling hills climbing above the treeline. Surrounded now by the big peaks.

In 1996 journalist Jon Krakauer signed on with an expedition to climb Mt. Everest. He was, and is, both a climbing fanatic and a writer, on assignment for Outside magazine to research the recent boom in climbing outfitters taking people up the mountain.

The story of the blizzard that engulfed the summit, trapping several climbing parties and killing 8 people, is well-known. Until the 2014 avalanche, it was the largest loss-of-life in a single day on the mountain. The very commercialization Krakauer was there to research is blamed for a large part in the tragedy.

Despite being caught in the blizzard and losing several friends Krakauer managed to write a vivid article which he expanded into the best-selling, controversial book Into Thin Air. In 2015 the movie Everest wove together the accounts of many climbers to tell the story again.

When I read Krakauer’s article it opened me not to climbing but to narrative nonfiction, the gripping story- and character-driven writing that makes information more palatable. It’s one thing to know the statistics of an event, another to know the feelings of the people who experienced it. More on that in a minute.

As we departed Dingboche we were headed to Lobuche for the night. I’d heard we’d be taking a break near some climber memorials, which seemed to excite some of the veteran climbers in the group. At the moment I didn’t put much thought into it.

This day brought some of the most exquisite scenery, as we rose above treeline. 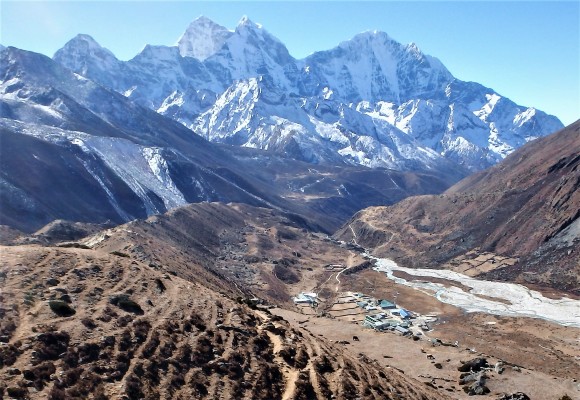 Looking down over Pheriche 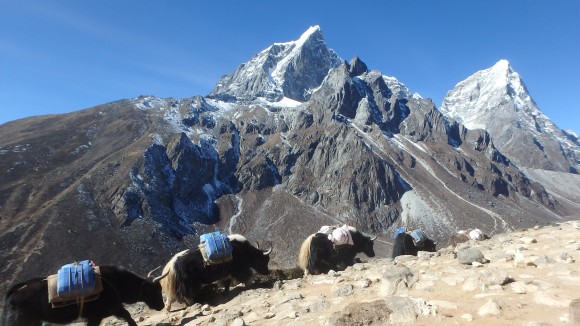 We lunched at a lone teahouse at the base of a steep hill, watching runners coming down as part of one of the high-altitude races that take place on the on the trail. They each ran alone, wearing clothes that looked too spare for the unpredictable weather, and we marveled at their courage and health. You don’t undertake one of those races unless you’re at your peak. 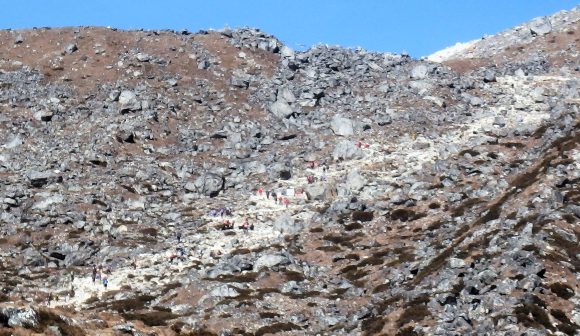 Hard to see the runners but they are in there, amidst trekkers and a horse or two.

After lunch we set out up the hill, walking the switchbacks across and across. Slow your pace, don’t stop, step by step. The memorials were at the top of that hill.

Passing under a banner of prayer flags we caught our breath and looked around a wide plateau. In roughly a circle large cairns have been constructed, some with plaques, others carved, one paint naming the climber they honored.

(Edit: Later on I wrote about the memorials for Poor Yorick, the online literary journal of Western Connecticut State University.)

The largest and most prominent belonged to Scott Fischer, one of the two legendary guides that died during the 1996 storm. Like so many people before me I stood in front of it with so many thoughts and questions. It’s a strange thing the way stories open a person’s life to the whole world, making us feel like we know them but also aware of how removed we really are. This was the most famous memorial in the clearing, and I expected to feel something more than just gawky curiosity Finally, uncomfortable with my own crassness I moved on.

Many of the plaques told a story.

I was drawn to an emerald green plaque bearing the name Song-Wonbin. This young Korean was one of five people who died on Everest on a single May day when some 200 people and 200 Sherpas were trying to summit. The thoughtful inscription created by people who loved this climber brought tears to my eyes: Go to sleep forever in the Everest.

I think that phrase, in the Everest, cuts to the core of what makes the region so powerful. It’s like a kind of cradle that gathers you in and hides you from the rest of the world. Even surrounded by languages from many countries, despite treacherous climbs and killer weather, the Khumbu valley feels safe and comforting. There’s a community of people and once you’re in it you must live together or die alone. Either way the mountains will watch over it all. All humanity could disappear and nothing would change in that valley, the rocks will stand as millenia more seasons come and go.

This is the best visual depiction I have of that feeling. Look in the bottom left corner of the photo. Compare those people in size to the terrain.

Across the clearing from Song’s memorial are a line of identical memorials lining a small ridge. Somehow I knew they belonged to Sherpas who died in service of the climbers. That was a poignant image, and for a moment I imagined the days going by, sun and moon, clouds and stars passing over this quiet spot of reflection. I don’t know who started putting the memorials here but they couldn’t have chosen a better spot.

After some time our leaders called us to move on so we packed up and turned north, on to Lobuche. Just one day away from our goal.