Terrain: The trail rolls up and down on a gentle overall decline. A good first day to stretch your legs and work out the kinks. Lots of stairs. Quite crowded with people and animals.

After a quick day and night back in Kathmandu to organize and purchase any last minute items (Thanks to my inability to bargain I now own a pair of outrageously priced trekking poles) we took the 40-minute flight from Kathmandu to Lukla this morning to start our adventure!

The street and shops near our hotel in Kathmandu

Back in Kathmandu we also switched into “expedition mode” with a planning session from our American guide Ryan Waters. Ryan is a record-setting explorer who’s climbed a zillion mountains and been up Everest four times, summiting three. He was the first American to complete the Adventurers Grand Slam, reaching both poles and all seven summits. He owns Mountain Professionals guide company based in Boulder, and is an all around world-class guy. He’s probably also exhausted, since he came straight here from guiding a team up Carstenez Pyramid in Indonesia, but he’s so laid back you’d never be able to tell.

We’re also fortunate to have Kat Follows with us, a record-setting climber in her own right and a professional athlete for Mary Kay. Last weekend Kat ran a 50 km race if that gives you any idea how hardcore she is. But she and her mother, Vicki, who’s also with us, are as ladylike and kind as you’d ever expect two proper British gals to be.

At the end of our trek, Kat and Ryan are taking another team member to go climb Lobuche, a smaller peak along our route. Then Kat and Ryan will continue on to climb Ama Dablam, one of the most striking peaks in the region.

Two additional team members are splitting off after Base Camp to climb Lobuche with one of Jagat’s guide. The rest of us won’t be climbing into anything other than our sleeping bags, and up a long, long trail. Still, the altitude can be the real problem around here so having experienced people who can monitor everyone is ideal.

Ryan’s talk was mostly about how we’ll function every day, e.g. the night before he’ll let us know if we need any special weather clothing, and to be sure to hydrate and eat well. Also, he stressed the importance of jumping on problems fast and keeping him the loop about anything we’re feeling without being embarrassed. In essence, he’s heard it all, and he’s trained in wilderness emergencies, so we’re not helping anyone by keeping secrets.

After repacking all our bags and storing at the hotel the ones we don’t need, we caught some of the first flights out of Kathmandu airport for Lukla, a small town at about 9,000 feet elevation where most people start their EBC trek. You can trek in from Kathmandu, but it adds something like an extra week to the trip in.

Lukla is quite literally built on the side of a mountain and it starts to get socked in by weather every day around late morning. The latest daily flights leave before noon, and many are often canceled before then. It’s not uncommon for people to be stuck in Lukla for several days waiting for flights back out when the weather is poor.

Several companies run the charter flights from the Kathmandu airport but they all fly 20-22 seat planes. The tiny Lukla airport has a super-short runway that is sloped upward to help slow aircraft down on landing. Planes take off downhill and the end of the runway drops off over a cliff, which is fine for planes because their wings catch and lift. All these factors – short runway, bad weather, small planes – have led the History Channel, Conde Nast, and more to name Lukla airport the most dangerous airport in the world. It’s definitely dicey, but most dangerous? Nope.

One end of the runway falls off a cliff, the other end runs into a mountain

Inside, the terminal is pure chaos as it is packed with climbers and trekkers trying to claim their bags in a small space. Jagat has a team of about 5 Nepali guides, and 4 porters who will be helping with our bags, they told us to go ahead and they’d meet us.

Off we went into Lukla for a bit of coffee and breakfast at the first of the first of many teahouses we’ll visit. Teahouses are kind of combo hotel/restaurants which are rustic in accommodations but comfortable in hospitality. You’ll hear much more about them.

Here’s Lukla. The work of catering to tourists is obvious!

For whatever reason, Las Vegas was advertising in the Kathmandu airport. 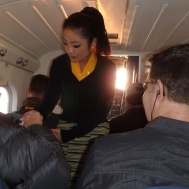 Teeny, tiny plane still had a flight attendent. She passed out candy to suck on and cotton for ears

Not a real Starbucks. Not much trademark prosecution around here. 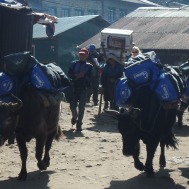 The first yaks I got to see! Though not really yaks…at this altitude they are a yak/cow hybrid 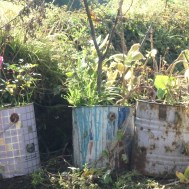