When our group descended Kala Patthar we found the rest of our team packed up and waiting. Even though we were headed downhill it was getting late and we wante to get to Pheriche for the night. We hurried to grab some tea, replenish our water, and get going.

The summit of Kala Patthar had been windy, cold, and dry and by the time we left I felt my chest constricting and a rattling in my lungs. Departing Gorak Shep took us up a small rise, and as I climbed I kept looking around and lifting my earmuff to listen for a repetitive, soft whistling noise that was bugging me. I thought it was coming from someone’s pack. When I finally took my earmuffs off and heard myself breathing I realized I was making the noise. I laughed. When I go to the doctor’s office with my all too regular bouts of bronchitis, they ask if I’m wheezing. I tell them I don’t think I am because I don’t know what that sounds like. Well, apparently it sounds like this, and I knew it instantly since so many people have described it to me.

This photo was taken about 1/3 of the way down the trail. I don’t look too bad do I? Trust me, I was starting to feel like crap. Achy, sore throat, and feverish. It was not going to be a fun day.  Also, I could give you an entire photo gallery of me trying to get up the nerves to get close enough to touch a yak. I was dying to see how that fur felt. 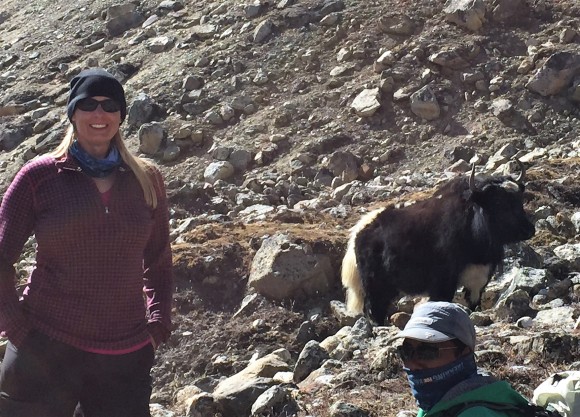 Desperately wants photo with yak. Too chicken to approach one.

The group was quiet, lost in our own minds as we hiked. I thought about how our team had dwindled: first 21, then 16 when a family who’d only joined us for Kumari departed. Someone dropped out for sickness, four more headed back after Deboche to return for work demands, two more went on ahead to climb on their own. Today, three left early to escort our ill friend down, tomorrow Kat and Ryan would break off to go climb Ama Dablam. Only five of us, plus two guides, were descending together today.

I’ve been sad each time the team fractured. I’m not a social person but I bond quickly when part of team or group. I enjoy listening to people, and the energy a group brings to an adventure like this is unmistakable. I like watching the dynamics of different combinations of people.

Or maybe I’m just tired, and sad to think that we’re on our way to leaving this incredible country.

Clouds were moving over the mountaintops ahead so we sent one of our guides ahead to arrange lunch. When we arrived we hurried through our foo and got back on the trail. Our friend on oxygen had waited for us at the lunch stop and we were glad to hear things were improving.

I, however, kept getting worse. I had a violent cough that was making my chest sore. I was still achy and could tell I was slightly feverish. That made for increased sweat, which was annoying on a cold day when I couldn’t shed layers. The guides kept saying “Khumbu cough” but I didn’t understand what they meant. They were so kind, and watched me with concern as I trudged. Later I looked the phrase up and learned it’s a common malady above 5500 meters. From Climbing-High.com:

“It is caused by the low humidity and sub zero temperatures experienced at altitude, and is thought to be triggered by over exertion. This leads to an increased breathing rate, which exposes the delicate lung lining to excess cold air, resulting in dried out
membranes and partially damaged bronchi. This causes extreme irritation which manifests itself in the form of a dry, persistent cough which can restrict breathing. Eventually the cough can be so violent and put so much strain on the chest cavity that it causes its victim to tear chest muscles or break ribs.” 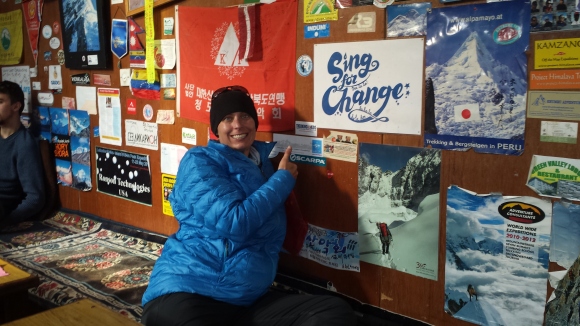 I left our mark with a Trekking for Kids sticker on the wall during lunch.

It was such a big day – first up Kala Patthar then down to Pheriche, so sitting down in our tea house was one of the best feelings. I was pretty congested so I just I camped out and drank tea in the dining area. I asked about a shower and the tea house staff said they could do a hot one but it would be from buckets. I considered it, but it was $6 and I didn’t feel like going through all I’d have to do. Dinner was chicken soup and pasta and I just sat down at the end to avoid getting others sick and enjoyed the conversation of my teammates. After dinner I climbed into my sleeping bag, apologizing to my husband that I’d be keeping him up with my noise. I still felt feverish so I took some cold medicine and hoped it would help me sleep.

The room was basic, but comfortable and roomy. There was a hole bathroom inside the room which was welcome so we didn’t have to put on more layers to go outside in the cold to a communal one. Overall, it was a long night after a tough day.

We were walking downhill and some of the trail was pretty rough and slightly steep. My regular glasses are progressive lenses but my prescription sunglasses are not. It got really cloudy so I switched to my regular glasses and found I had a tough time seeing where I was stepping. The angle we were walking meant I had to look down at my feet through the reader part of the lenses, or else put my head straight down to see through the normal part of the lens. It wasn’t a huge deal, but was a problem I never would have anticipated. If you have contacts they would be a good option around here, except for the dryness. Bring lots of moisture solution! 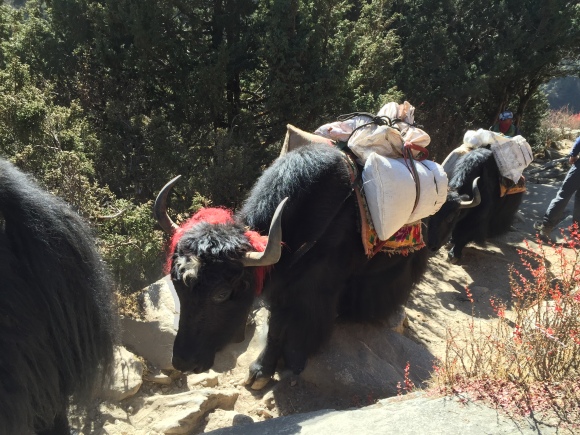 Dyed hair on a yak. That’s one way to tell them apart!